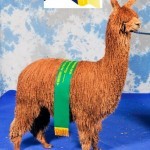 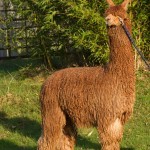 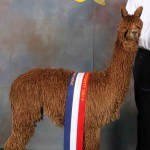 Krug is an example of an ‘ideal’ Suri male.

He has a very dense fleece with a very high cutting weight whilst retaining his fineness.

He has an outstanding lustre, handle, fleece coverage and strong bone. He has been placed 1st in every class he has been shown in and gone on to be Champion or Reserve Champion every time.

He is sired by USA Pucara Sur-Real Rapper and has the outstanding Durango and MacGyver in his pedigree. His dam is a Wonder Dream daughter.

Quality speaks for itself, Krug is now the ‘Sire of Champion Progeny!’